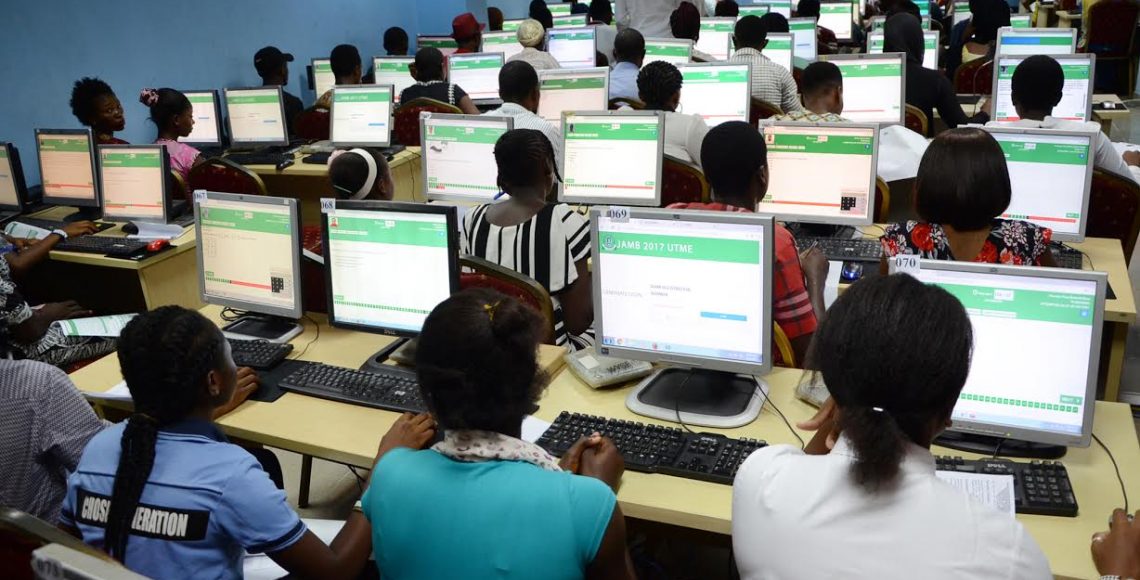 Following the release of the results of the 2021 Unified Tertiary Matriculation Examination (UTME), some Nigerian universities have announced the dates for their Post-UTME.

It qualifies them for admission into tertiary institutions of their choice. Lists the universities that have so far released useful information regarding the Post-UTME.

UNILAG’s Post-UTME aptitude test will hold from Monday, November 1 to Friday, November 5 2021. PAY ATTENTION: Join Legit.ng Telegram channel! Never miss important updates! According to the university, online registration for the Post-UTME screening exercise for the 2021/2022 Academic Year will commence from Monday, October 11 to Friday, October 29, 2021. The screening fee is N2,000.

Online application started on Tuesday, September 21 and will close at 6pm on Monday, October 11, 2021. The university said candidates will be communicated on the date and time for screening in due course. Candidates are required to visit www.delsuonline.com to generate a virtual PIN with N2,000 fee.

According to BBC Pidgin, Tai Solarin University of Education started sales of online Post UTME screening registration forms on Monday, September 15 and will close on Friday, October 15. The screening exercise will hold at the main university campus on Wednesday, October, 20.

The online registration for Post-UTME/DE screening for 2021/2022 admission started on Friday, October 1 and will end Sunday, October 31.

BBC Pidgin reported that JAMB registrar, Professor Ishaq Oloyede listed some universities that have released their own cut-off marks.

However, that BUK’s cut-off marks vary depending on the courses. Check below:

Candidates who chose the above universities as the choice of study in the 2021 Unified Tertiary Matriculation Examination (UTME) should check the cut-off marks to know whether they meet the admission requirement or not.

The controversy over results of this year’s Unified Tertiary Matriculation Examination (UTME) conducted by Joint Admissions and Matriculation Board (JAMB) is yet to abate as educationists and parents have demanded a remark or outright cancellation of the examination to pave way for a fresh exercise.

They also called for a total overhaul of the examination body to conform to global examination practices.

National President, Association of Formidable Educational Development (AFED), otherwise called low-profile schools, Mr Orji Kanu, said this year’s examination should not have taken place considering the backlog of those who are already qualified for the available little spaces existing in universities.

Kanu said if those who were successful in the last exams are yet to get admission to their choice institutions, JAMB should have stayed action on this year’s UTME.

The AFED president alleged that mass failure of candidates currently being protested by stakeholders might be a deliberate ploy by the examination body to give room to only few prospective students to join those already on queue from last year’s examination.

He said: “University of Ibadan (UI) for instance, announced that its 100 level students are still at the orientation stage, which means no space for new students. We are aware that COVID-19 pandemic disrupted global academic calendar and Nigeria does not operate in a separate space. One may be forced to believe that JAMB is more focused on revenue drive rather than its primary responsibility of selecting qualified candidates who can fill few spaces available in our institutions.”

He however noted that if JAMB thinks otherwise over all the agitations, it should present stakeholders with explanations on why parents should continue to trust the body as not serving a revenue-generating agency.

To address the deficit on human capacity, Kanu said there is an urgent need for the country to replan its educational policies and programmes.

Considering the stress students and parents go through to register and participate in UTME, Kanu said results should be valid for at least two years, to enable those who performed well but could not secure admission due to carrying-capacity of the institutions, use same result the following year.

An educationist, Sammy Ndubuisi, called on the examination body to undertake holistic review of the exercise to unravel the cause of the mass failure, whether human, programming or some other scientific error.

Ndubuisi said if those affected are in the overwhelming majority, drastic measures have to be taken, including re-marking or re-running the tests, at no cost to the candidates. Equity must be ensured in favour of the candidates, who should not suffer any disability or enjoy undue advantage from the exercise.

On the validity of JAMB results for more than a year, Ndubuisi noted that entrance examinations and admission exercises take place on an annual basis, hence, UTME results should always be fresh and not warehoused like factory products.

According to him, each examination tests the current ability of a candidate who is fairly judged against other candidates in the same cycle of examinations.

“This cohorting is how to get the best candidates into our tertiary institutions. It happened before JAMB and should remain so. I agree that, once admitted and matriculated, a student’s admission could be deferred for a good reason,” he stated.

While insisting that the examination body is still relevant, the educationist called for the decentralisation of the agency for greater efficiency.

“Centralisation has never been effective for any length of time in Nigeria. Perhaps, the body could be decentralized or its examinations run in batches. It will take a rigorous and sincere internal audit of its operations and the input of end-users (tertiary institutions, education stakeholders and prospective candidates) to make JAMB more efficient and responsive to emerging situations, Ndubuisi added.

In the same vein, Association of Tutorial School Operators (ATSO) has described this year’s UTME as the worst in recent years. The group lamented that the examination was marred by irregularities, including unnecessary frustration of candidates, extortion, computer malfunction, multiple results and subjecting candidates to danger and risk.

Speaking at the annual review of public examinations, the association, led by Mr Dotun Sodunke, said considering the plethora of errors in the initial results released and subsequent mass failure, it is most likely that the software used in marking the script malfunctioned.

Sodunke recalled that a similar situation played out in 2013/2014 during the tenure of Prof Dibu Ojerinde, when JAMB had to add 40 marks to the score of some science students after results had been released.

He said: “The advent of JAMB’s misadventure in this year’s UTME is the mandatory use of National Identification Number (NIN) for registration. We knew it was a recipe for disaster when over 1.5 million teenagers were being forced to get NIN with one month in a country technology; infrastructure, centres and personnel to get them registered were almost non-existent.

“What is the fate of those students that were caught up in the computer glitches and logged out of the system while writing the exam? JAMB’s policy summersault in Literature in English syllabus is another sore point in the examination. Candidates had prepared adequately with the new syllabus released by JAMB but they found out too late that the examination body had resorted to setting questions from the old syllabus that was supposed to lapse by 2020.

“ATSO hereby join other critical stakeholders in rejecting the UTME results. We hereby call for the remark of the examination or outright cancellation to pave way for a fresh and less controversial exercise. JAMB is the only examination body I modern world that will charge candidates for printing results of exams paid for; charge as high as N2,500 for each error a candidate wishes to correct on his portal and same for change of course or institution,” Sodunke lamented.

Some parents blamed the development on insecurity and poverty, saying many families cannot feed well, hence, students find it difficult to read or concentrate.

“It’s like JAMB just wanted to extort money from parents. Do universities have the capacity to carry candidates that wrote last year and this year? JAMB should not have conducted exam this year, it sold forms just to collect money.
MEANWHILE, JAMB has confirmed that the performance of candidates in this year’s examination is poorer than what it recorded in the last three years.

The Registrar, Prof Ishaq Oloyede, blamed the development on coronavirus pandemic, which disrupted academic activities, as well as peculiar environmental factors such as insecurity and kidnapping of school children.

Oloyede, while justifying the mass failure said: “Last year, when they took the examination, candidates had gone far in their syllabus. But this year, they suffered incomplete academic session; they had to cope with emergency online lessons and even many other disturbances like insecurity.”

Potasfield Schools is a Co-Educational Christian School that has a passion to model virtues in purity, intergrity and we open up new ways of making an impact in the world that we live in. It is located in the Heart of Festac Town.

Potasfield Schools … Working together with God in Shaping Destines through the Power of Knowledge.

2022. All Rights Reserved
We use cookies on our website to give you the most relevant experience by remembering your preferences and repeat visits. By clicking “Accept All”, you consent to the use of ALL the cookies. However, you may visit "Cookie Settings" to provide a controlled consent.
Cookie SettingsAccept All
Manage consent

This website uses cookies to improve your experience while you navigate through the website. Out of these cookies, the cookies that are categorized as necessary are stored on your browser as they are essential for the working of basic functionalities of the website. We also use third-party cookies that help us analyze and understand how you use this website. These cookies will be stored in your browser only with your consent. You also have the option to opt-out of these cookies. But opting out of some of these cookies may have an effect on your browsing experience.
Necessary Always Enabled
Necessary cookies are absolutely essential for the website to function properly. This category only includes cookies that ensures basic functionalities and security features of the website. These cookies do not store any personal information.
Non-necessary
Any cookies that may not be particularly necessary for the website to function and is used specifically to collect user personal data via analytics, ads, other embedded contents are termed as non-necessary cookies. It is mandatory to procure user consent prior to running these cookies on your website.
SAVE & ACCEPT